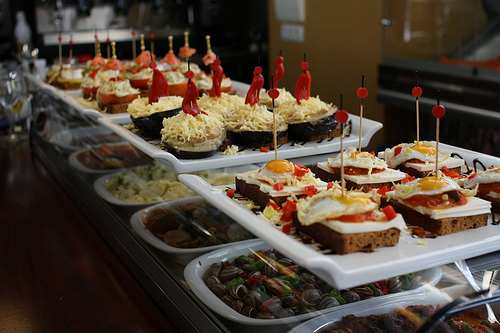 It’s little wonder that food lovers are drawn to Spain in their droves: this Mediterranean country is renowned for its fantastic produce and passion for great cuisine. One area that boasts a particularly rich culinary heritage and thriving dining scene is Murcia. Located between the beaches of Almería to the south and the resorts of the Costa Blanca to the north, this part of Spain is a real foodie gem. Its capital, also called Murcia, is home to some outstanding restaurants and tapas bars.

Anyone planning on making the most of their Spanish holidays and cheap flights to Murcia in 2013 may want to check out the dishes on offer. By saving cash on their transport, holidaymakers will surely leave themselves with more money to spend on their meals.

One man who is no stranger to the food of Murcia is Kevin Gould. Writing for the Guardian, he suggested that “Spanish chefs in the know acknowledge that Murcia is home to Spain’s best tapas”. He added that the quality of the food in this city stems from the rich, arable land surrounding it and from the Mediterranean Sea.

The journalist added that the real “food jewels” here are tapas bars, some of which are “rough-cut”. Many of these eateries are open from breakfast until midnight, meaning holidaymakers have plenty of flexibility in terms of when they dine. Tapas dishes have a long tradition in Spain and many believe they originated as a snack for field workers during the long hours between breakfast and lunch time. Spaniards typically tuck into tapas at midday or during the evening before dinner.

Culinary creations that can be found in the city include mussels with cumin and chilli, fried squid, fried quails’ egg canapés and ensaladillas, which are Russian-style salads and come in many forms.

Holidaymakers heading to Murcia have plenty of eateries to choose from: our favourite are the La Pequeña Taberna, Plaza San Juan, Calle Canovas del Castillo and the Restaurante Hispano.

Bio: Michael Gomez just moved over to the South of Spain from his native California. Fluent in Spanish, he’s now helping people and friends back home discover more about the beauty of Spain.