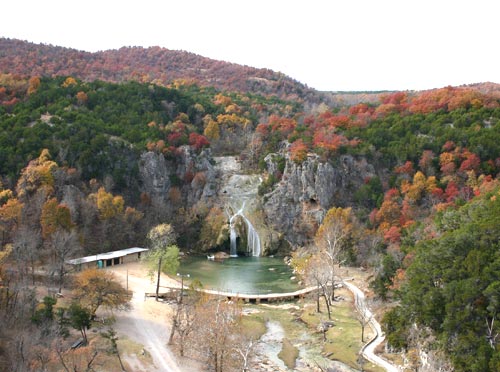 The great national parks are terrific for a reason. Yellowstone National Park in Wyoming, Montana and Idaho; Yosemite in California and Olympic National Park in Washington all have tremendous appeal and well-known features.

That’s is a lot of competition for a parking space. I remember some years back claiming the last campsite at Yellowstone one year, which didn’t disappoint with great fishing, Dall sheep and bison ambling on the side of the road. But the traffic jams! We went to get away from bumper-to-bumper cars, gas fumes and angry drivers. Instead we drove towards those modern headaches.

So, where do you go to get away from it all, anymore?

The good news is that there are still choices that are considered off the beaten trail, still hidden from vacation crowds, but nestled into communities that still great visitors with open arms.

In south-central Oklahoma, the Arbuckle Mountains are among the oldest physical formations in the United States. As ancient mountains, they have been weathered over time and today boast heights of 1,412 feet above sea level, which makes a hike through the Arbuckle Mountains accessible to younger and older visitors than other, foreboding mountain ranges.

Hikers will notice the natural beauty of these ancient hills, which were first formed 1.4 billion years ago and named for a well-known Indian fighter, career Army soldier General Mathew Arbuckle (1778-1851). But they are also a terrific destination for amateur geologists, given the diverse range of minerals underfoot. These include glass sand, limestone, dolomite and granite. But the area is also replete with deposits of zinc, iron and lead.

The Baraboo Hills in south-central Wisconsin were once named by the Nature Conservancy as one of the “Last Great Places.” These are also part of an older geological formation called a syncline, which is rolling and layered set of sedimentary structures.

Visitors will find themselves in the small city of Baraboo, population 10,711, which was the 19th century headquarters for the Ringling Brothers Circus, which gave way to the nickname “Circus City,” a role the city took seriously enough to fill the local library with the largest collection of circus information in the United States. With the Ringling team settled in, several other circus companies also choose Baraboo for their headquarters, as well.

Vacationers can also find recreational options at Devil’s Lake State Park, a 360-acre lake with 500 foot bluffs along the shore and miles of trails to explore.

The Baraboo Range is also not a frightening challenge for the family, although it is known from areas that present a challenge to rock climbers, who flock to Balance Rock and the Devil’s Doorway to test their skills.

Sandia in Spanish means watermelon, which speaks to the color and general shape of the Sandia Mountains from a distance. The Tiwa Pueblo name for the Sandias is posu gal hoo-oo, which means “where water slides down the arroyo.” 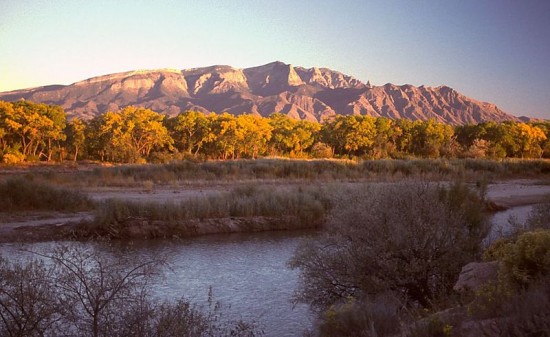 The Sandia Mountains and Rio Grande at sunset, looking southeast from Bernalillo

Just as that implies, if the Sandia Mountains are a watermelon, they are nestled in a thick garnish of green woodlands that locals sometimes refer to as the watermelon’s rind. Phrased different, this is a picturesque mountain range, with peaks above 10,000 feet northeast of Albuquerque that is, essentially, a dry, rock environment surrounded by lush greenery.

This north-south range consists primarily of two summits, the Sandia Crest and South Sandia Peak, which climbs to 9,702 feet above sea level. The entire range, however, is 17 miles long and from four to eight miles wide, making it a small and isolated mountain range, ripe for exploring.

Because the range is separate from the more higher Sandia-Manzano Mountains of which it is a part, the Sandia Mountains appear as a bold outcropping surrounded by lowlands. But that feature has a reciprocal side to it, which is that, once you get into the mountains, the views are far-reaching and spectacular.

There are, of course, miles and miles of splendid trails to choose from with the easier hikes following local creeks or winding through foothills. It is only 0.47 miles to hike to Sandia Man Cave, an mid-cliff cave made accessible by concrete and steel stairs that was discovered by anthropology students in 1936 and quickly revealed it had a long history of inhabitants, including native Americans and Ice Age animals.

Looking for quiet, out of the way and beautiful? It turns out, there are still a few options left.