Home  »  Travel   »   Where to Find the World’s Biggest Cruise Ships 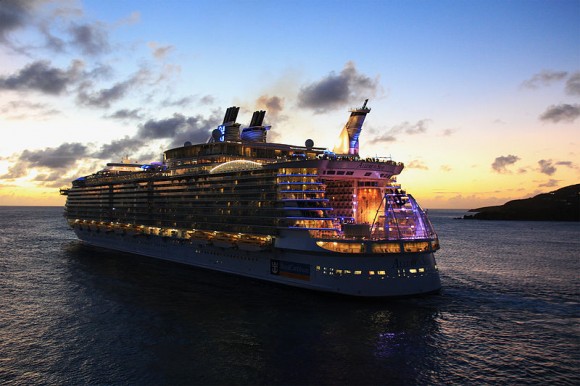 There was once a time when the Titanic was the largest floating vessel ever created, and the name still evokes a sense of unrivalled size and grandeur. However, if you were to put the Titanic side by side with modern day cruise ships, some of them would actually dwarf the legendary icon. The sheer size of cruise liners being built today is nothing short of incredible, and the facilities with which they are equipped on the inside are stunning, from theatres to ice rinks to huge green expanses acting as indoor parks. But if you really want to be astounded, check out the very biggest of big – the world’s largest cruise ships.

Allure of the Seas

Royal Caribbean’s Allure of the Seas is the world’s biggest cruise liner. At 225,282 tonnes it carries 5,400 passengers. The Allure of the Seas sets off from Florida and cruises the islands of the Caribbean. The ship is divided into 7 “neighbourhoods” like a floating a city, and incorporates its own Central Park and Boardwalk. It houses the first floating Starbucks, A huge range of specialty restaurants and bars, a zip line, surf simulators, cinemas, a theatre, sporting facilities, and so much more. It also boasts the best kid’s program of any cruise ship.

Oasis of the Seas

The Allure of the Seas’ sister ship, Oasis of the Seas, is Royal Caribbean’s groundbreaking liner that revolutionised cruising in 2009, not long before the Allure was built. Very similar to the Allure, it is shy just 0.5ft (in length) away from being identical in dimensions: 225,282 tonnes, 1,186.5 ft long and carrying 5,400 passengers. It’s almost identical in design, also housing 7 neighbourhoods and the famous floating Central Park, there are some small differences in cabins and onboard facilities but the ship is equally as impressive and well-equipped as her sister. This ship also departs from Florida and tours the Caribbean.

Norwegian Cruise Line’s mega-ship Norwegian Epic has over 20 dining options, day and night live entertainment, a huge selection of bars and lounges, state-of-the-art fitness facilities and a wealth of onboard activities for guests to explore and enjoy, including kids’ programs and an aqua park. At 155,873 tonnes, 1,081 ft long and with 4,100 pax capacity, it’s the world’s third largest cruise ship and the pride of Norwegian Cruise Line’s fleet. This ship tours the waters of the Mediterranean and the islands of the Caribbean, depending which cruise you choose. It has many options for departure points, including Barcelona, Rome, Marseille and Miami.

Freedom of the Seas

Yet another of Royal Caribbean’s fleet, the Freedom of the Seas is the 4th largest cruise ship on the planet. 10 pools, over 100 spa treatments and 1,360 staff on board are just a few of the Freedom’s boasting points. It weighs a total of 1,600 tonnes, is 1,112ft in length and carries 3,634 passengers. It has all kinds of shops, dining, entertainment and exciting onboard activities like rock climbing and ice skating, earning it a place amongst the top ranks of cruise liners. It takes guests on Caribbean cruises, departing from Port Canaveral in Florida.

A cruise holiday is so much more than a boat ride – there’s probably more to occupy guests on one of these mega-liners than most passengers have available to them in their own neighbourhoods. They represent a perfect melding of modern ingenuity and luxury, mechanics and entertainment, a real treat for anybody who decides to buy a ticket. If you’re interested in discovering the magical world of cruise holidaying, check out www.cruiseabout.com.au and book a ticket to a taste of these floating palaces