The enchanting city of Venice with its many beautiful attractions along or near the canal system is a magnet for tourists. St Mark’s Square, with its magnificent historic buildings dominated by St. Mark’s Basilica, is the largest square in the city and probably the most popular with visitors. The romantic Bridge of Sighs across the Rio di Palazzo (Palace River), and the majestic Rialto Bridge spanning the Grand Canal, are renowned for their stunning architecture. Many of the most important sights are accessible from Venice’s ‘streets’ – the network of 150 canals used by locals and tourists alike.

Roman citizens fleeing from Germanic and Hun invasions are thought to have established the city of Venice in the fifth century on low-lying, uncultivated ground where water collected. During the Middle Ages this swampy lagoon was dredged of soil, creating a series of small islands on which today’s city lies. Instead of streets full of motorized vehicles, a maze of canals threads through the city spanned by more than 400 bridges for pedestrians. This means that sightseers can view some of the principal attractions on foot, and also from the water.

Venice was a central part of the Grand Tour ­– a voyage through Europe originally undertaken by aristocrats in search of art, culture and heritage and many of the grand houses and palaces have eccentric architecture and a checkered past. Here are just a few of the marvelous attractions that can be viewed from the Grand Canal – the ‘main street’ of Venice. 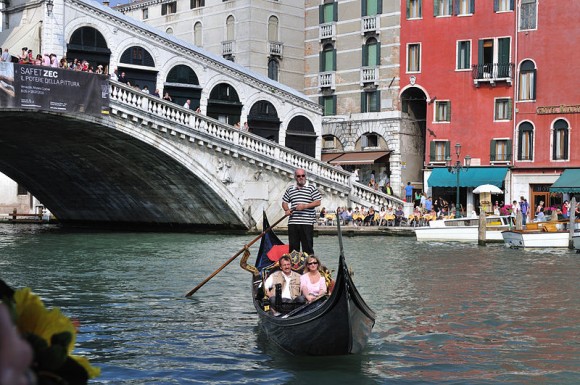 The Fondaco dei Turchi was a private house built in the 13th century and for two hundred years was occupied by Turkish traders. Now home to the natural history museum, it has splendid towers and an arcade – resulting in a reasonably realistic version of a Veneto-Byzantine palace.

Now a casino, the Palazzo Vendramin-Calergi was the first of the Venetian palaces to be built on Renaissance lines at the end of the 15th century. The most famous resident was German composer Richard Wagner who died here in 1883.

One of four bridges that cross the Grand Canal, the Rialto Bridge is the oldest – the current stone version dates from 1591. There are two inclined covered ramps, filled with shops, leading up to the central portico and the bridge is now considered one of the city’s architectural icons.

From the oldest to the newest ­– in 2008 a new bridge spanning the Grand Canal designed by Santiago Calatrava was opened to the public. An elegant arc of glass, stone and steel, modeled on the hull of a gondola, the ‘Constitution Bridge’ at first caused some controversy. Today it is commonly known as Calatrava Bridge.

Venice has a public waterbus transport system known as the ACTV vaporetto network, however visitors wanting to see the cultural attractions and museums can now benefit from new tours – the Vaporetto dell’Arte. Visitors who get cheap rates for hotels in the city, particularly off-season, can offset the cost of using the Vaporetto dell’Arte by the great value hotels on offer. Remember, no tour of Venice is complete without a trip down the Grand Canal on a gondola, especially on a romantic evening.