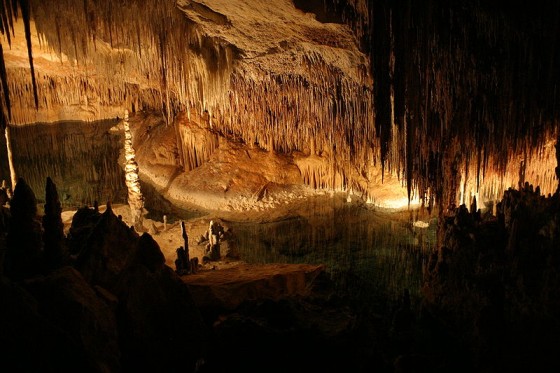 We all know that Majorca boasts stunning beaches and excellent seaside resorts, but what many people are unaware of is that the Balearic Island’s natural gems go far beyond this. What I want to tell you about today are the stunning caves that are dotted across the isle.

You may be thinking ‘what’s so special about caves?’, but believe me when I say that once you’ve seen some of the rock formations in these caverns you won’t be disappointed you made the effort to visit them.

Just quickly before I move on, if you need any help organising your holiday in Majorca – or just want to get some inspiration – head over to this website.

Cueves del Drach (or the Dragon Caves) are located in Porto Cristo and are one of the most popular subterranean spots to visit. The caverns are also among the largest in the island – you’ll cover 2 km when you’re exploring them, to give you an idea of their scale.

Because these caves are so popular, they’re well lit and knowledgeable guides are able to direct you through the chambers and provide you with information about the stunning stalactites and stalagmites you’ll see as you wander. These caves have been formed by the sea over the course of hundreds of years and, in fact, are home to a vast lake – Martel Lake – which is 117 m long and 30 m wide.

An excursion to Cueves del Drach ends with a classical music concert by the lake and then a short boat ride out on to the water. When it’s all lit up, this place is truly magical.

Also in Porto Cristo are Cuevas dels Hams (or Hook Caves), which are less famous than Cueves del Drach but no less spectacular. They get their name from one particular chamber where the stalactites resemble hooks. There are actually 14 caverns in total in this system, as well as an underground lake – known as the Sea of Venice.

Explore in here and you too will be treated to a live musical performance by the subterranean lake, but I’d advise you to look closely into the water as it’s home to prehistoric crustaceans that are white and completely blind.

The Caves d’Arta are near Arta in the north-east of the island and are a series of incredibly spectacular chambers that were first mapped by explorer Edouard Martel. Interestingly, author Jules Verne is said to have visited this cave system and it is reputedly one of the things that inspired his novel Journey to the Centre of the Earth.

As you head deeper underground you’ll be met by ever more impressive stalagmites and stalactites – one of the most astounding sights is a 22 m high stalagmite that has grown in one of the largest chambers, and that’s continuing to rise up from the ground at a rate of 2 cm per year.

The final place I’m going to look at is the Caves of Campanet, which are located in the north of the island in the foothills of the Tramuntana Mountains. This system of chambers covers more than 3,200 sq m and stretches up to 50 m below the ground.

The rock within these caverns is predominantly white limestone, but in places you get shocks of rusty browns and reds, which are due to the presence of iron oxide within the rock. Here, too, the stalactites and stalagmites are impressive – don’t rush an exploration into this bizarre world, take your time and enjoy it.